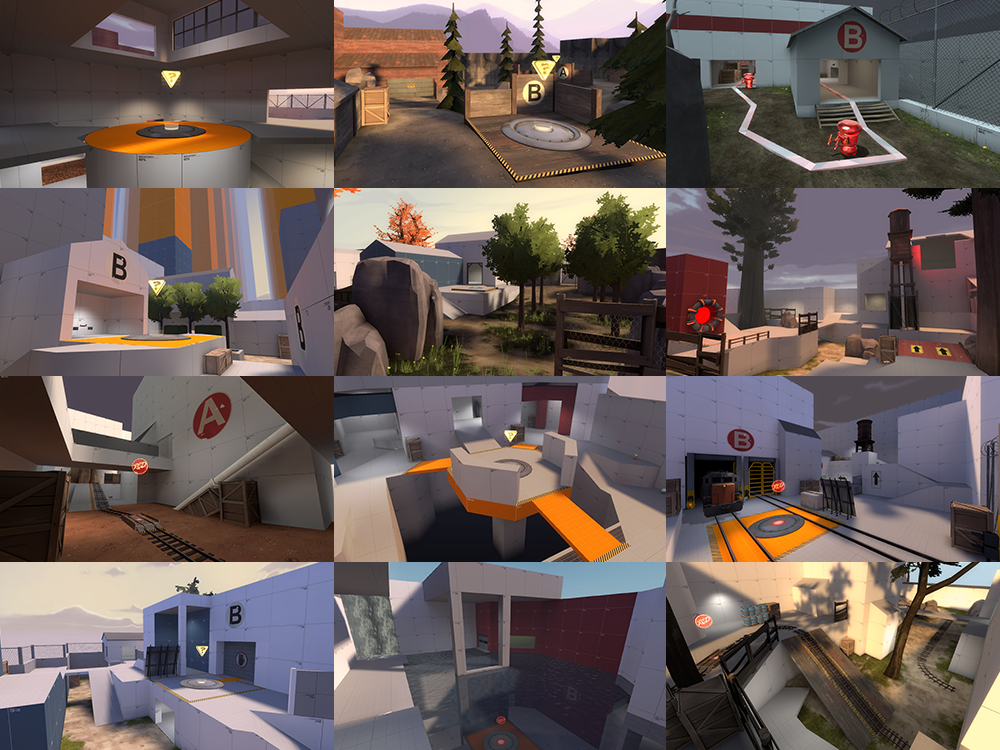 12 of the 22 levels I have created so far for the Microcontest Project. You can find full versions of these images further down this page

The Season 2 banner image used to promote microcontest on the TF2maps.net forums

Date: May 2020 - Present
Roles: Level Designer, Contest Designer, Community Manager
Tools: Hammer World Editor, Source Engine, ProCreate, Adobe Photoshop
Stemming from a joke in which I challenged people in the Team Fortress 2 level design community to make a fully functional TF2 level in under 72 minutes, the Microcontest Project is a series of 24-hour-long level design jams designed to push the boundaries of level design in TF2. The strict time limit and the nature of the prompts are designed to run counter to traditional Team Fortress 2 level design philosophies to promote rapid experimentation and improve participants' skill level when it comes to level design. Designing and participating in these events has significantly improved my skills as both a game and level designer, and the overall skill level of the community has also gone up since they began.
Despite being named "contests" they are much closer to game jams in practice, as the number of entries very quickly outpaced my ability to fairly judge and score all the entries. Microcontests are currently in their third "Season" with 22 microcontests having been completed to date, amassing over 400 entries from community members. As well as designing the prompts for the microcontests, I also participate in, organize testing for, and write feedback for every entry in every microcontest entirely on my own. 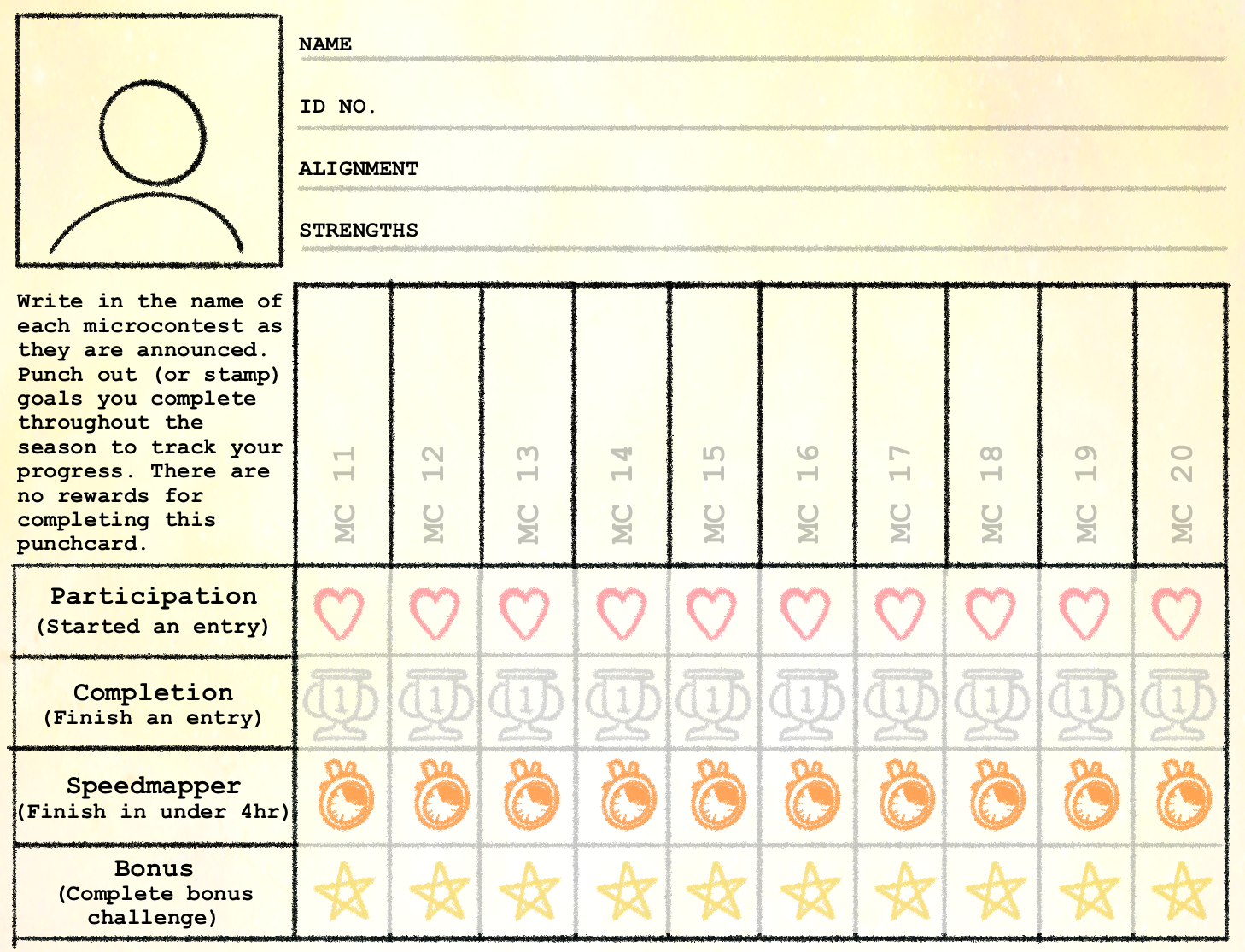 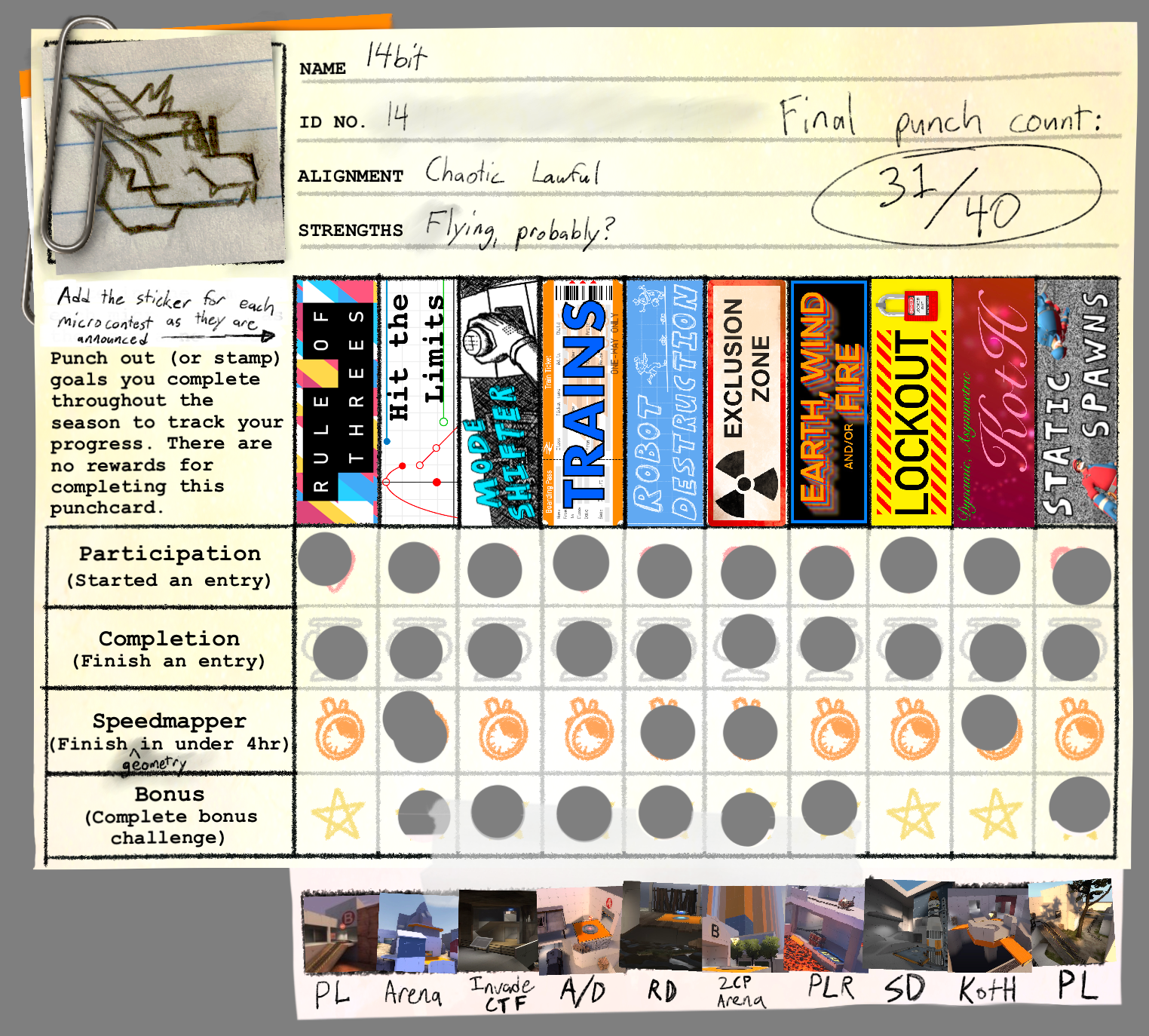 The first ten microcontests had wildly different formats, rule sets, and time limits from one to the next. Working to address community feedback on length, style of prompts, and accessibility, I developed a new standardized format for "Season 2" that extended the time limit to 24 hours to allow those in other time zones to participate, but encouraged participants to finish in only 4 by awarding "bonuses" for finishing faster or with a slightly harder prompt. Participants are encouraged to keep track of their entries and which extra challenges they have completed on "punchcards" provided at the start of each season. Implementing these changes caused participation to almost double, despite the overall difficulty going up.
For each event, participants are warned one will be happening a week in advance, along with a hint on the theme and an estimated difficulty level, but have no clue what the rules will be until they begin. Once the prompt is revealed, participants have 24 hours to make a level that fulfills the requirements.For each microcontest I also create a promotional banner image in Procreate or Photoshop. Each one goes through several iterations before I settle on a final design that communicates the idea of the challenge, and is varied enough to stand out when placed alongside the rest of the existing banners. As participants like to use them on their punchcards, they must also be easily readable at small sizes. Below you can see some of the banners I have made for various microcontests, along with the prompts that went with them.

MC13: Mode Shifter - "You must take any previous map you've made (microcontest or not, previously released or not) and rework it into a completely different game mode."

MC14: Trains - "Make a map that includes a train hazard. Payload carts do not count."

MC16: Exclusion Zone - "You have been given a template that contains a grid of 512x512x32704hu pillars, arranged exactly 1024hu apart, filling the entire editor grid. You must make a map around these pillars, with no playable space inside them."

MC17: Earth, Wind, and/or Fire - "You must make a map that includes one or more of the following: a moving platform (earth), a jump pad (wind), and/or a trigger_ignite-based hazard (fire)."

MC18: Lockout - "You must make a map for a mode you have never made a map for before."

MC19: Dynamic, Asymmetric KotH - "You must make a King of the Hill map that either changes over the course of a round, or is meaningfully asymmetrical."

MC20: Static Spawns - "You have been given a template with two spawn rooms, one for each team, placed back-to-back facing away from each other. You must build a map around these spawns, and you may not move or modify the given geometry in any way."

MC22: Solids - "You must make a map that contains no more than 199 solids ("solids" are individual objects in the editor)."

Designing the prompts for the microcontests is often a challenge in and of itself; they must be interesting enough to push participants outside of their comfort zone, but not so difficult so that they get frustrated and give up. They must simultaneously allow for creative freedom while being restrictive enough that participants can't come in with a fully-formed plan ahead of time. They must also be very clear and concise, with little ambiguity about what is expected from the participants. I spend a lot of time carefully writing the prompts to try and balance all these factors, and many ideas for microcontest have been left on the cutting room floor due to being too difficult to effectively communicate.
Over the course of running the microcontests, I have significantly improved my ability to organize and condense complex information and instructions into more easily digestible forms. Some early microcontests had multiple paragraphs of preamble before the important information, and dense FAQ sections full of unnecessarily technical details, whereas the most recent ones are much easier to understand. See MC6: BATT Builder for probably the most unnecessarily complex prompt, and MC22: Solids for a more recent one to compare it to. 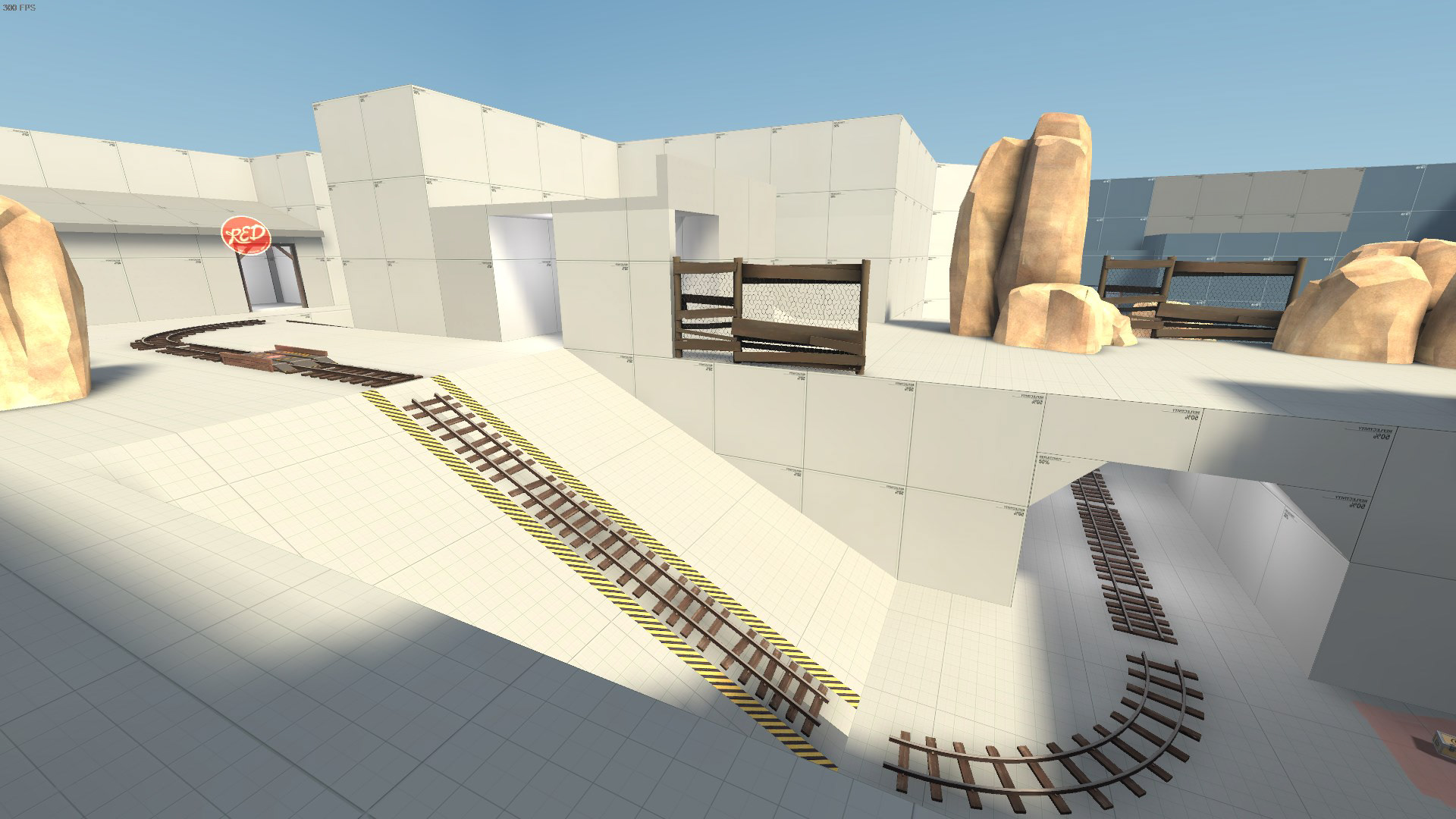 The first of two entries for MC2, in which participants built one stage of a two-stage level, then gave it to another participant to finish 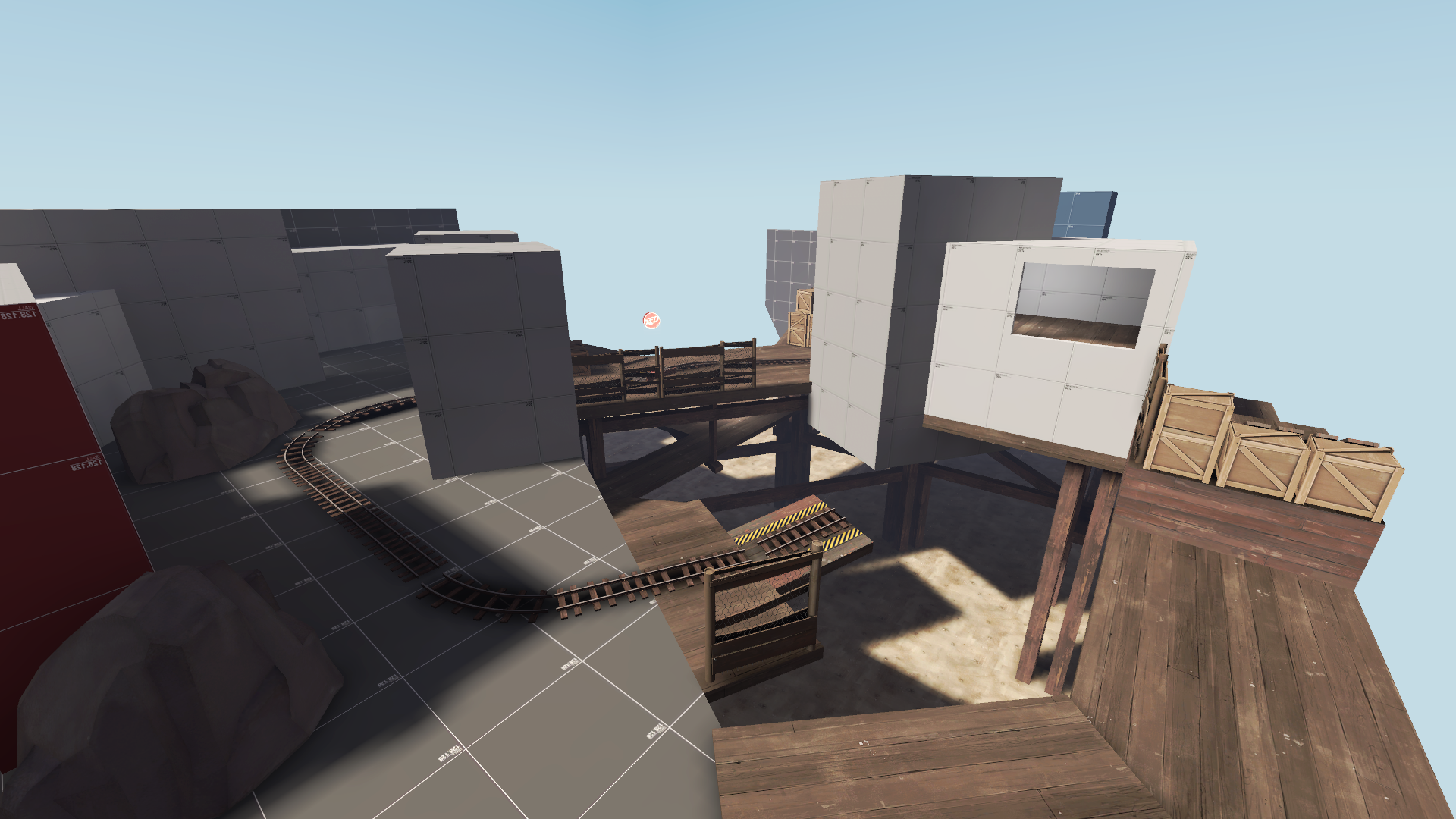 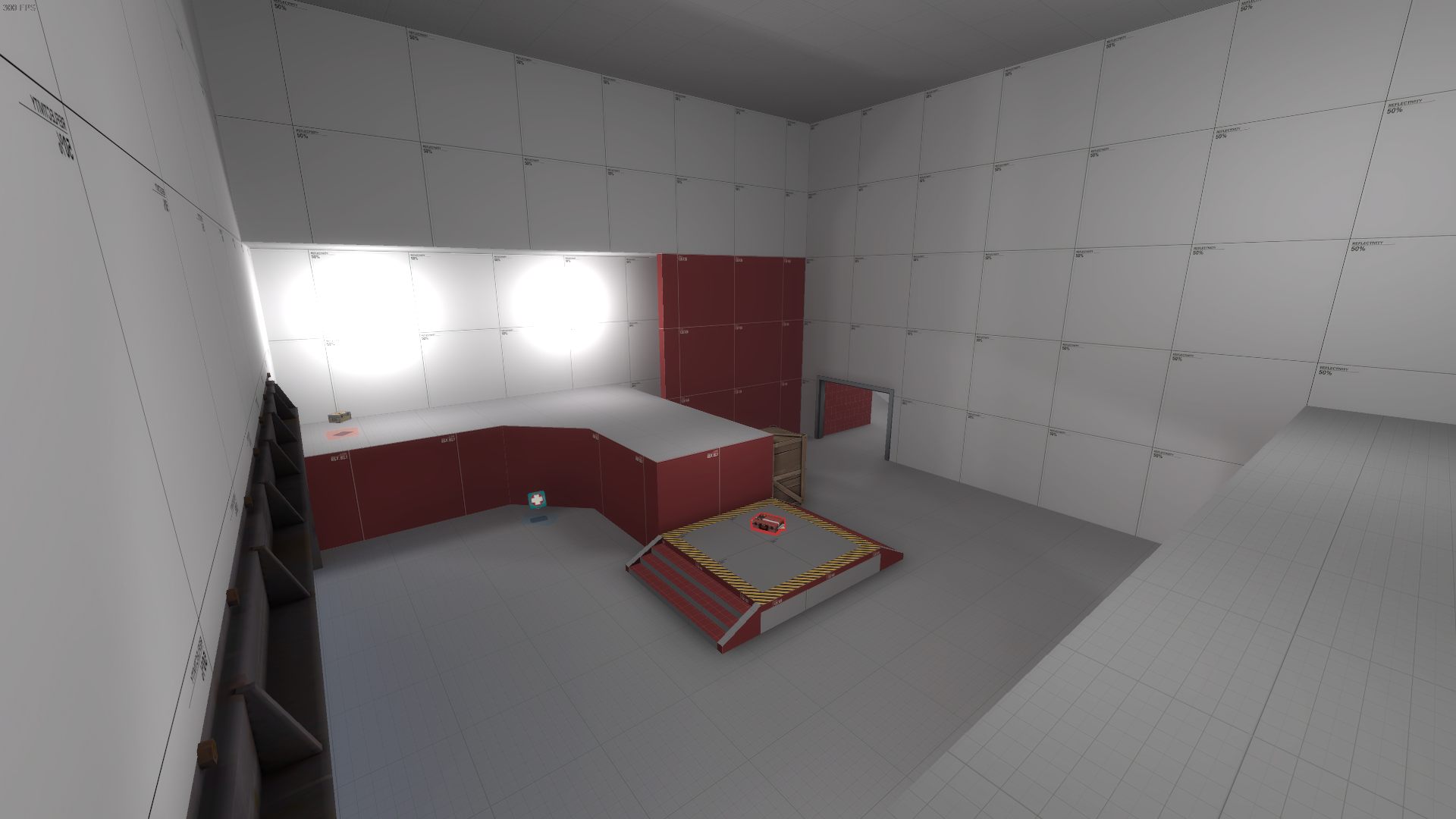 A Capture the Flag map for MC3, whose only requirement was to have flags in the level 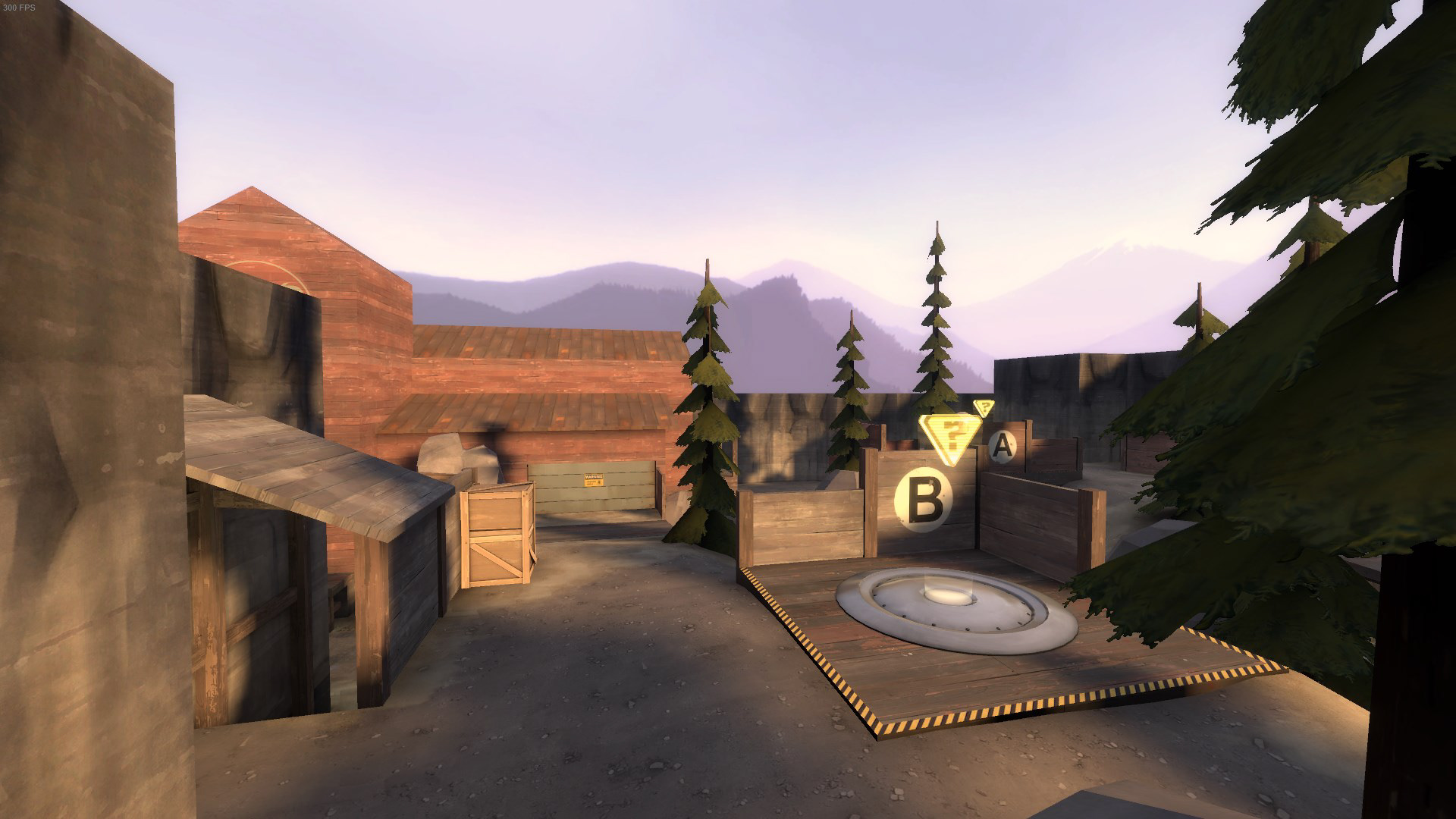 A fast-paced 2CP Arena map made for MC4. I used the promp of making an arena map to see how small I could make one while still having it work, and it turned out to be a hit 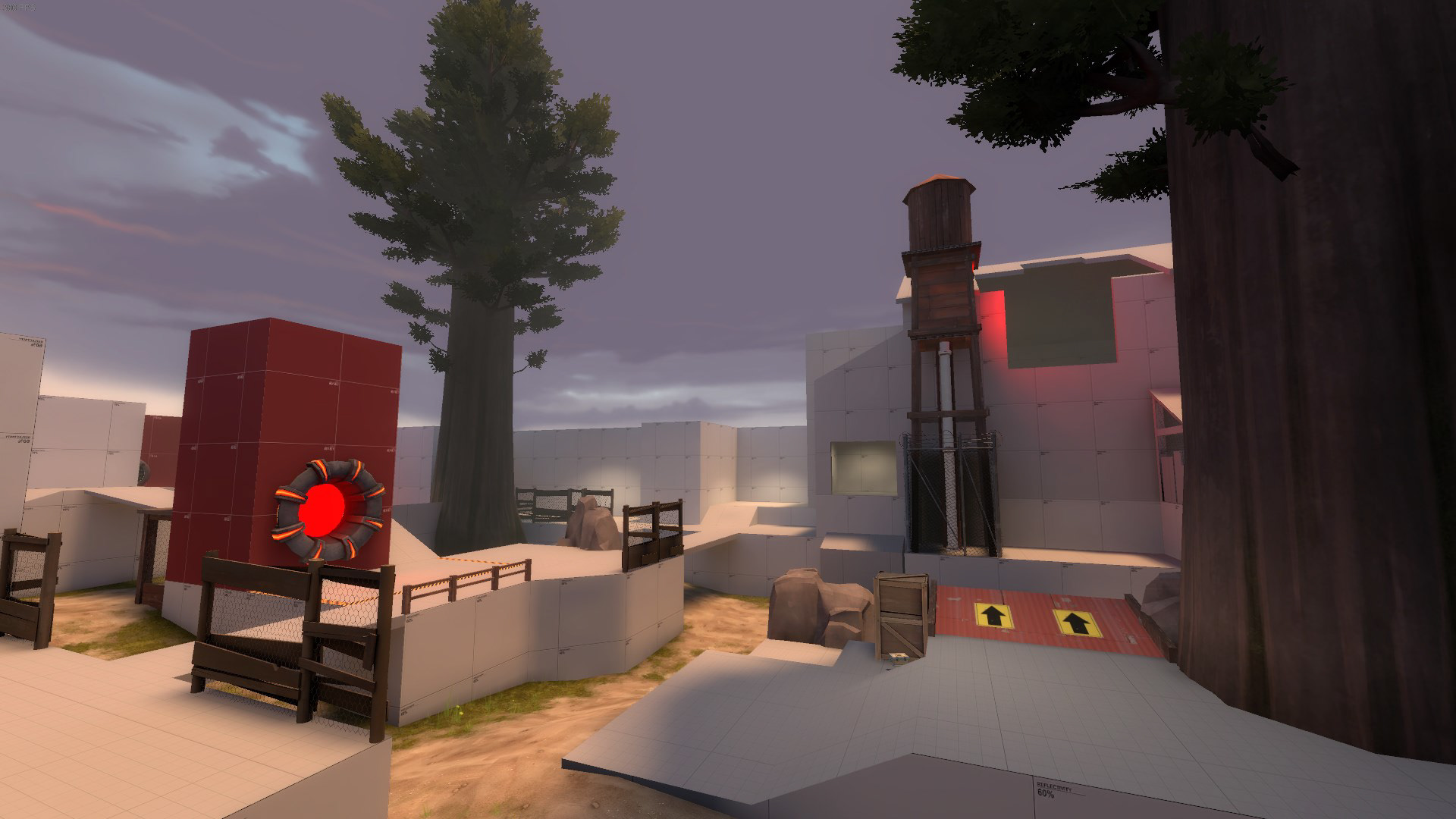 The MC5 version of what became Gigantic. This map helped to cause a mini PASS Time renaissance in the TF2 level design community by proving the mode had potential. The finished version of Gigantic can be found elsewhere in my portfolio 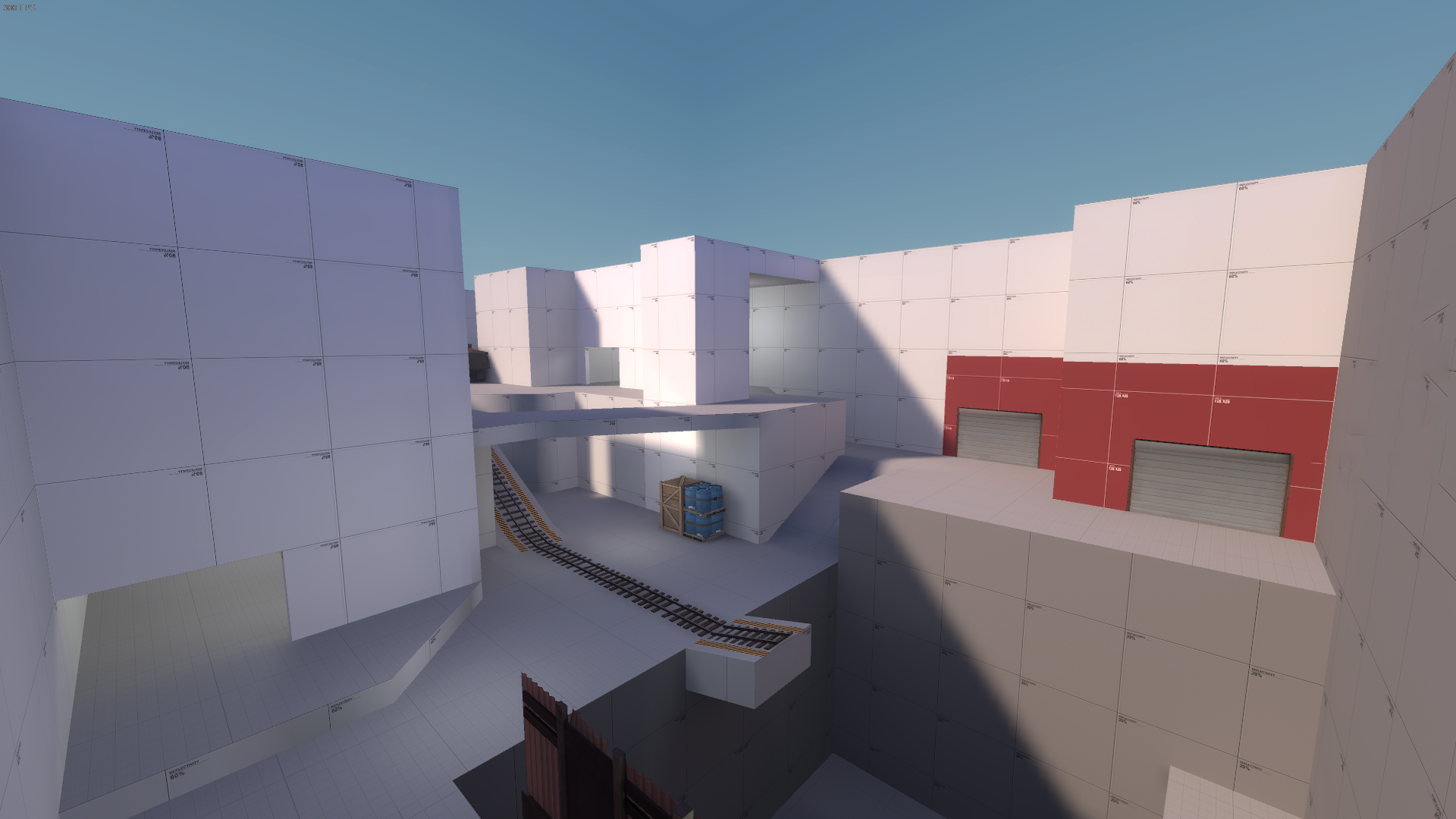 A payload map made for MC6. While the final point was interesting, much of the rest of the level was not 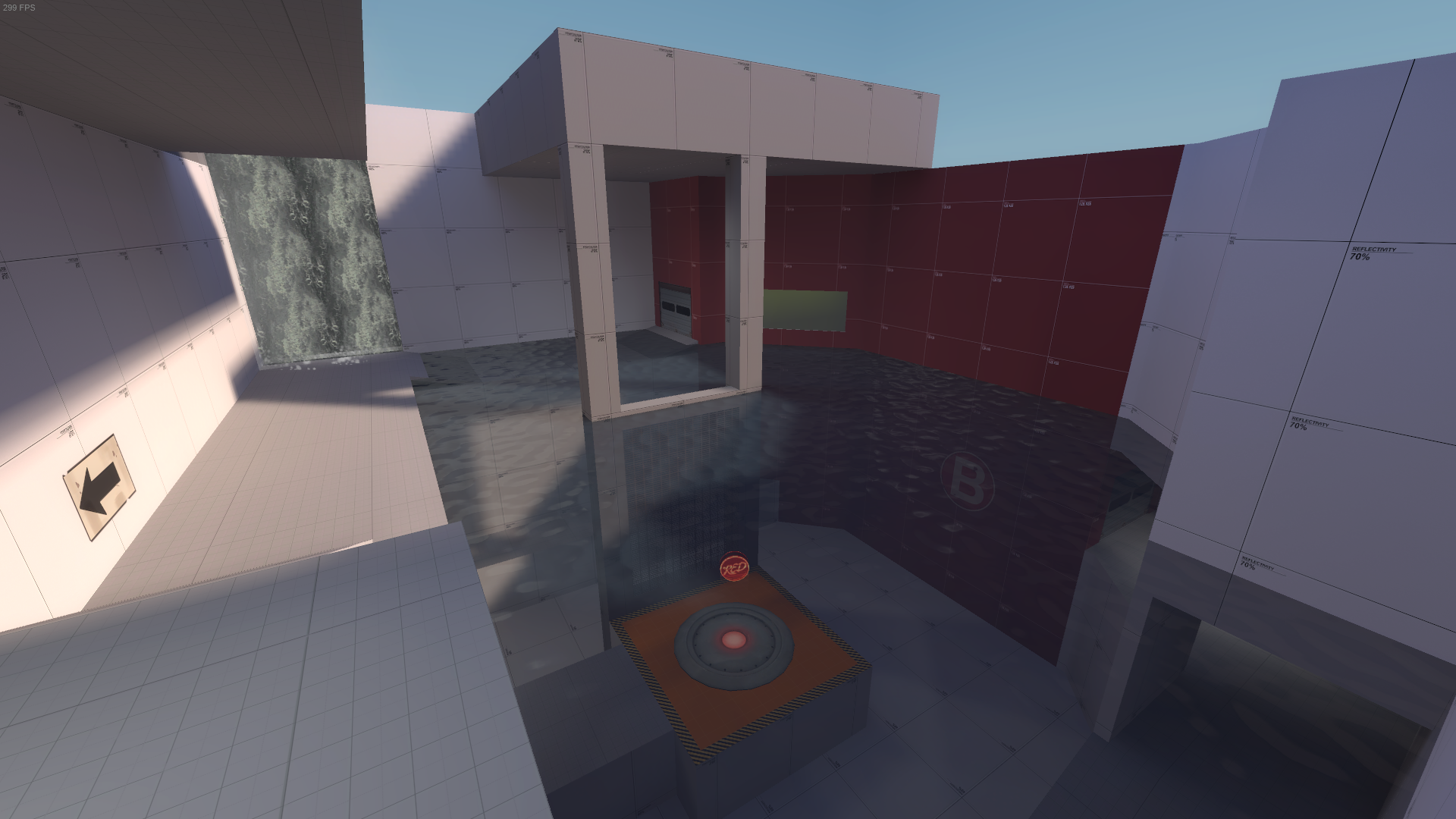 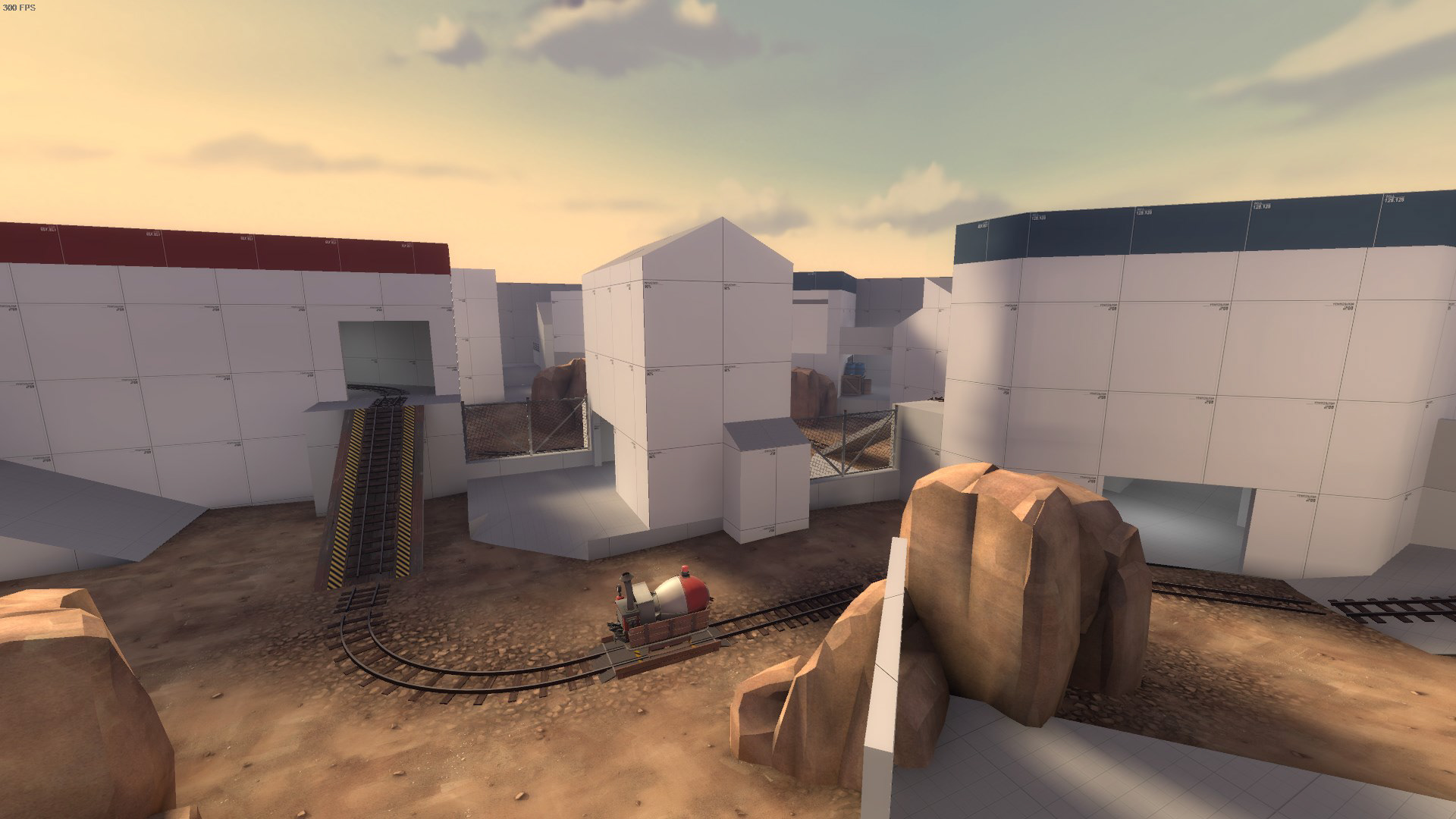 Faced with limited space requirements for MC8, I revisited a custom game mode I had made years before and angled geometry to make the most of the limited space 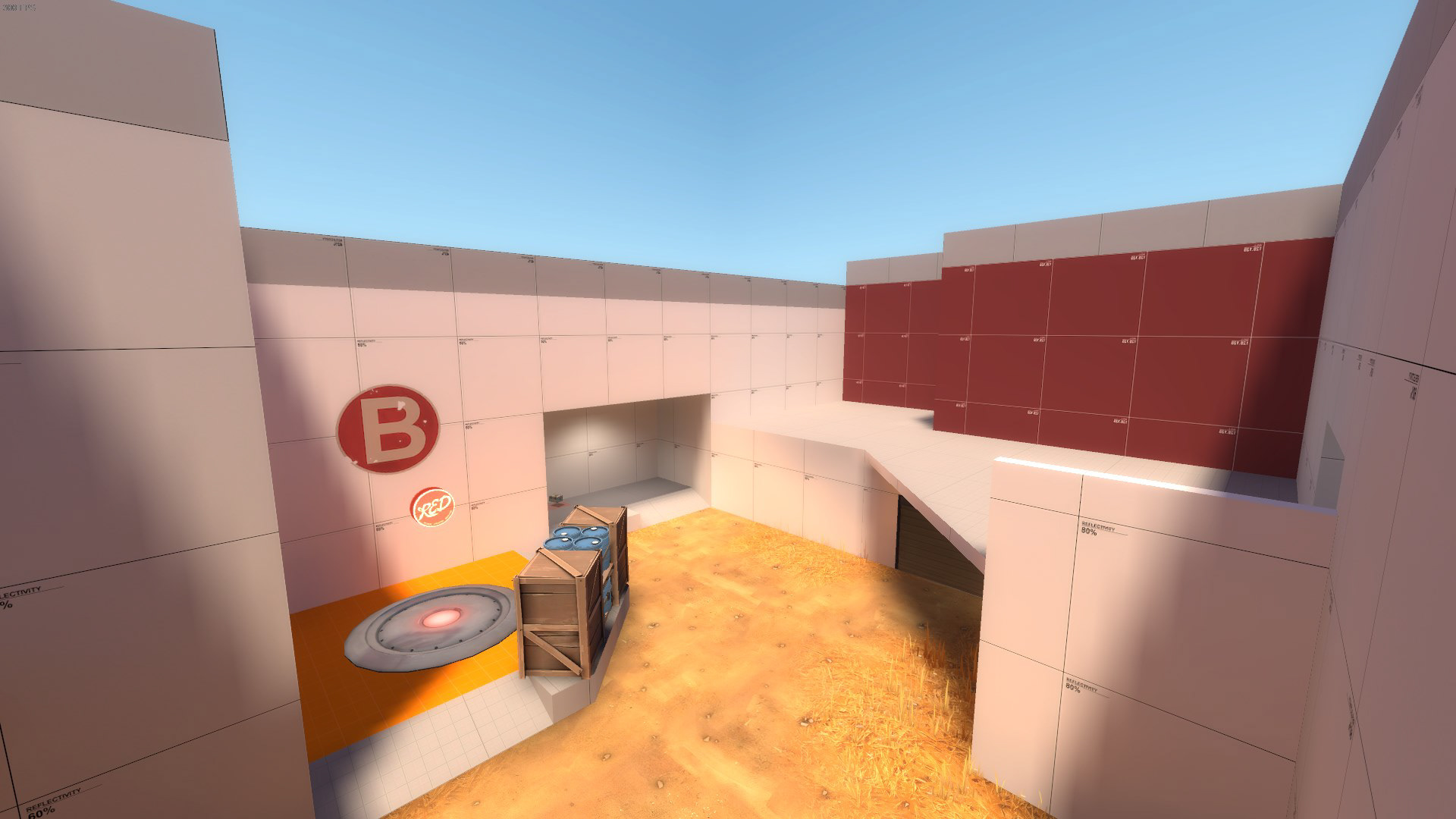 The final capture point on my half of MC9, which saw myself and another participant plan a map together then split up and execute the plan separately, resulting in two similar, but very different levels 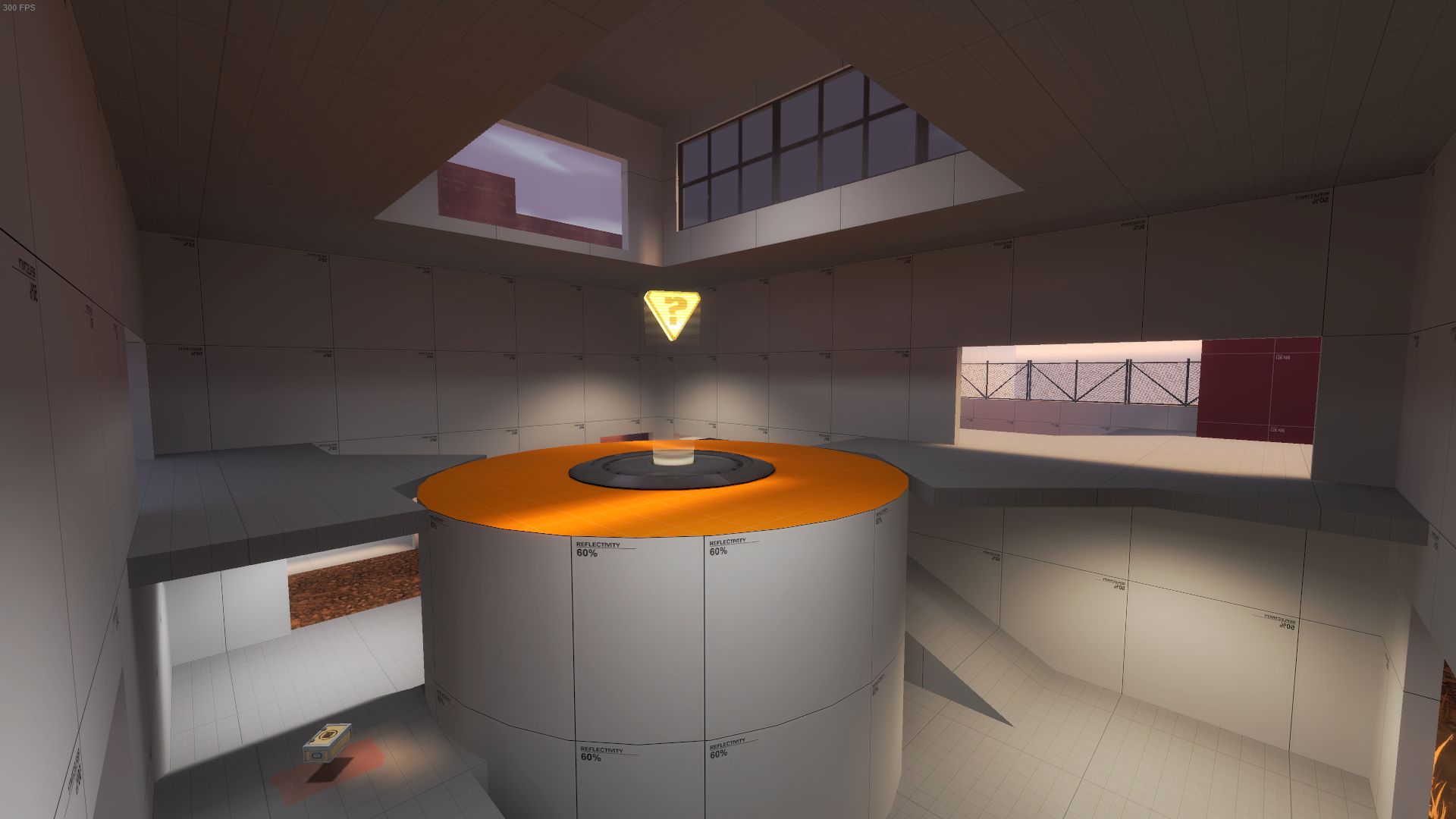 A remake of my very first level for Team Fortress 2, made for MC10 which required participants to remake a previous level of theirs

While I design and run every mircocontest, I also participate in them! To date, I have made 22 levels for microcontests. Above are my first ten microcontest maps from Season 1, and below you'll find all the entries from Seasons 2 and 3 so far. As you can tell, the early ones are quite bare-bones, but over time my entries have gotten more ambitious and complex.
As part of the Mircocontest Project, I make a point to test and write feedback for every entry. There are three main reasons for this. First, guaranteeing every participant reasonably in-depth feedback from a well-known community member encourages more people to join in. Second, it lessens the blow of potential failure by guaranteeing an outside perspective on what does and doesn't work. This is especially important given the tight time limits; participants are encouraged to use the microcontests as playgrounds to test new ideas, so if a level doesn't work they know exactly why and can move on without spending more than a weekend on it. And finally, writing the feedback give me a chance to reflect on both my own work and the work of others. Putting my expectations and the reality of what I have made side-by-side in writing has been incredibly useful for me as a designer, and learning by analyzing the work of others has as well. 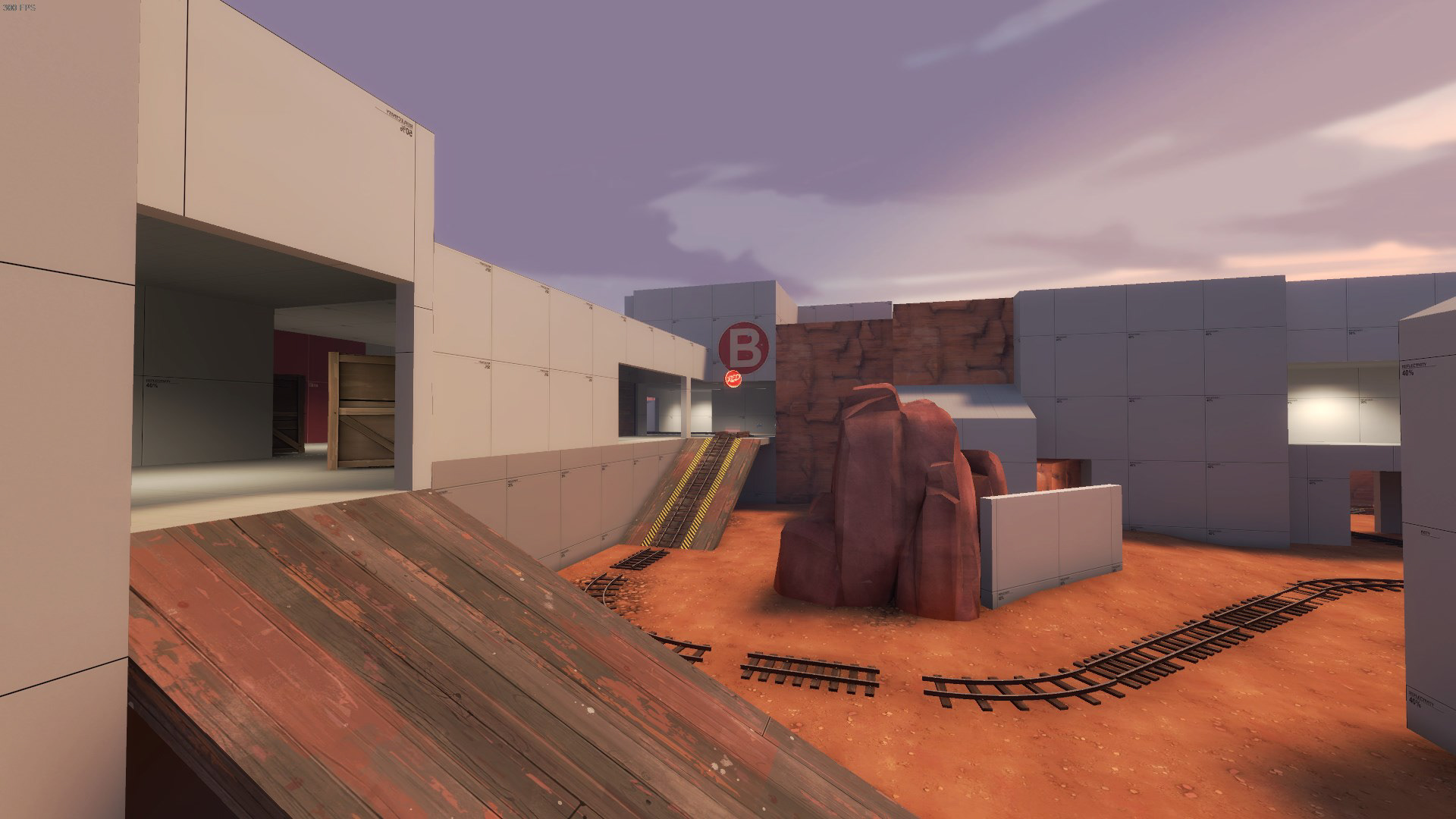 A Payload map created for MC11. Featuring several experimental elements including a unique final point and having the cart start far from Blu's base, it was well recieved in testing 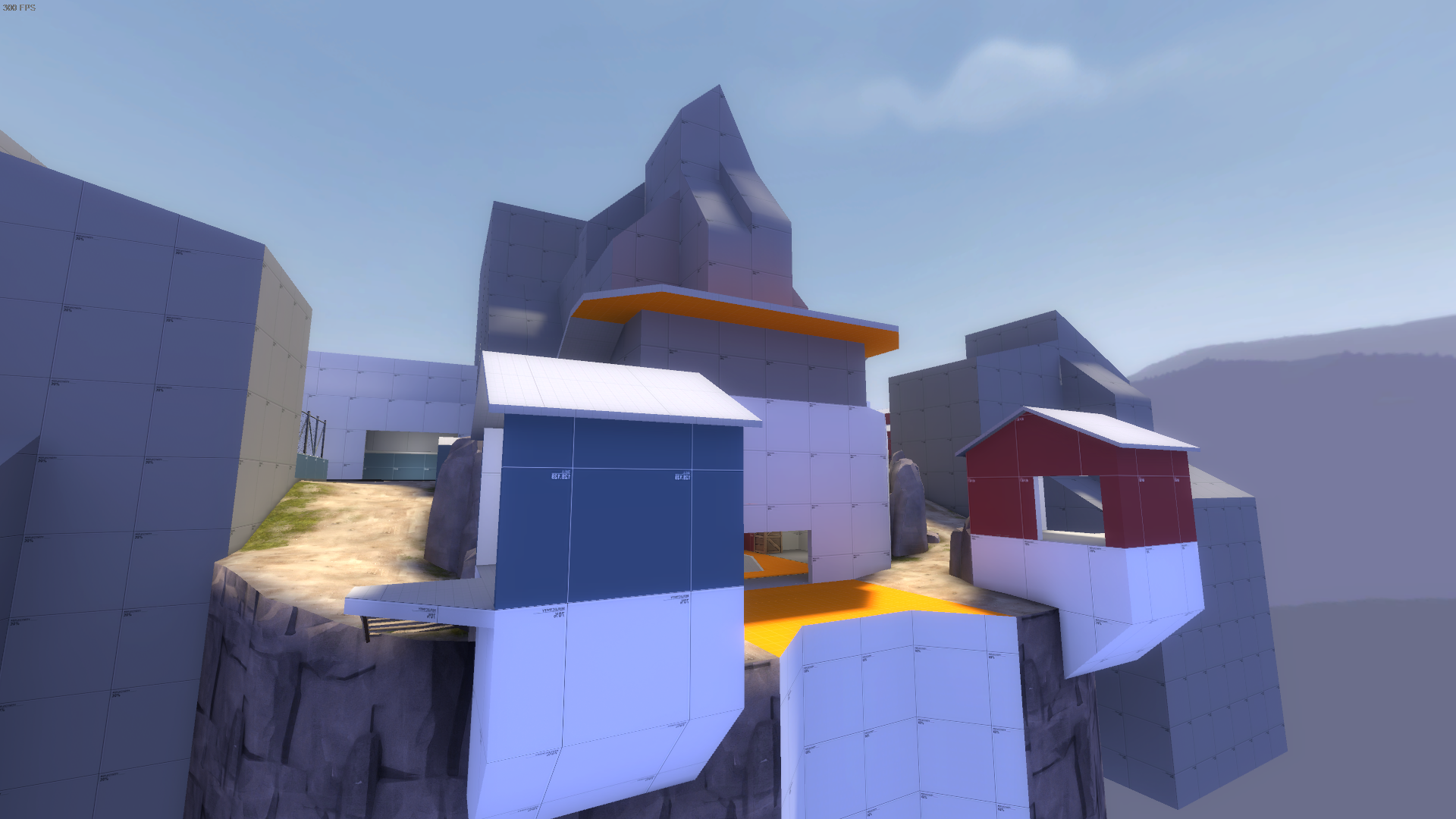 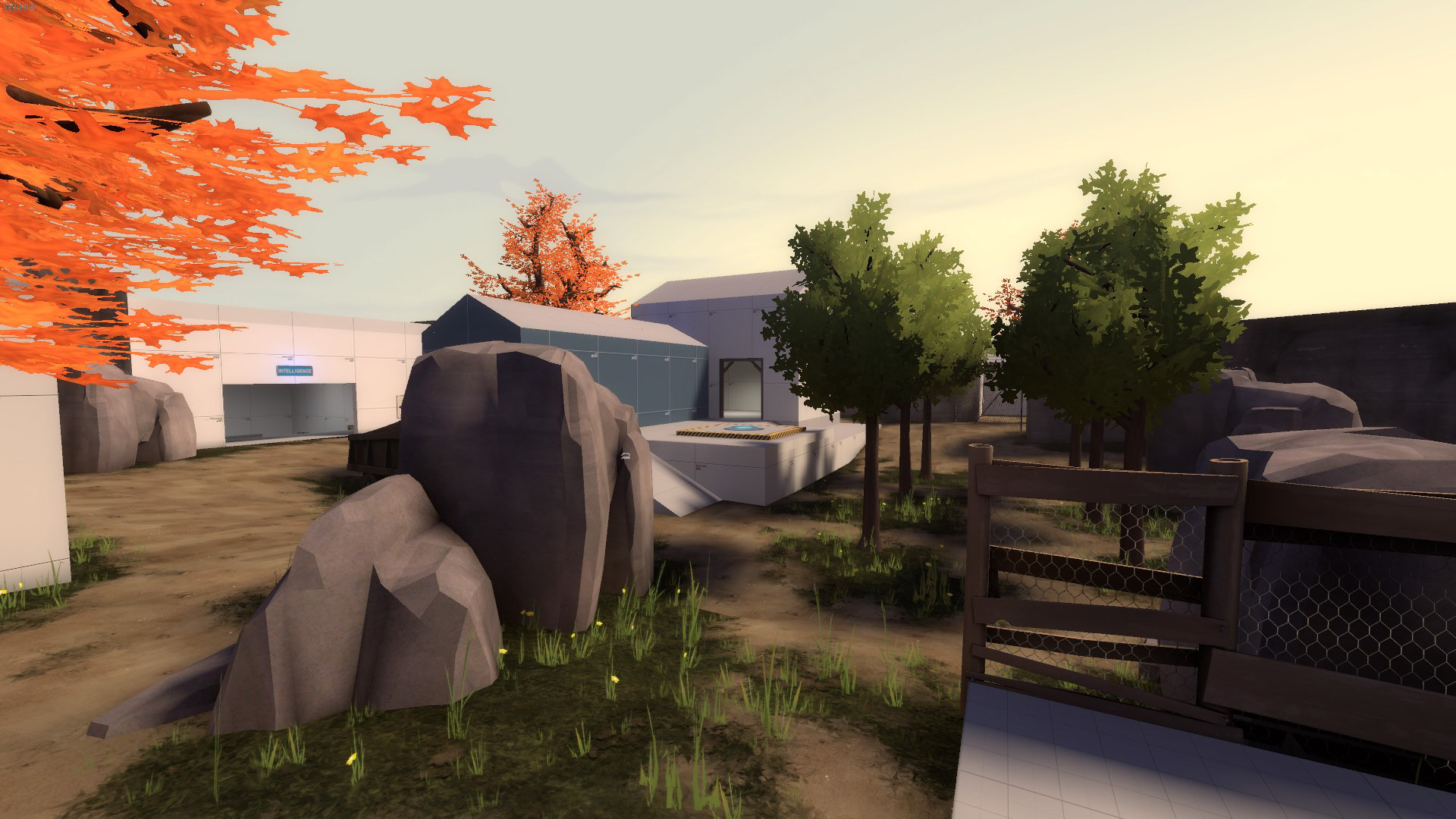 An invade-CTF conversion of a TC map created for MC 13, which ended up working better than the original. The design changes to account for ICTF were then backported into the original map to improve it 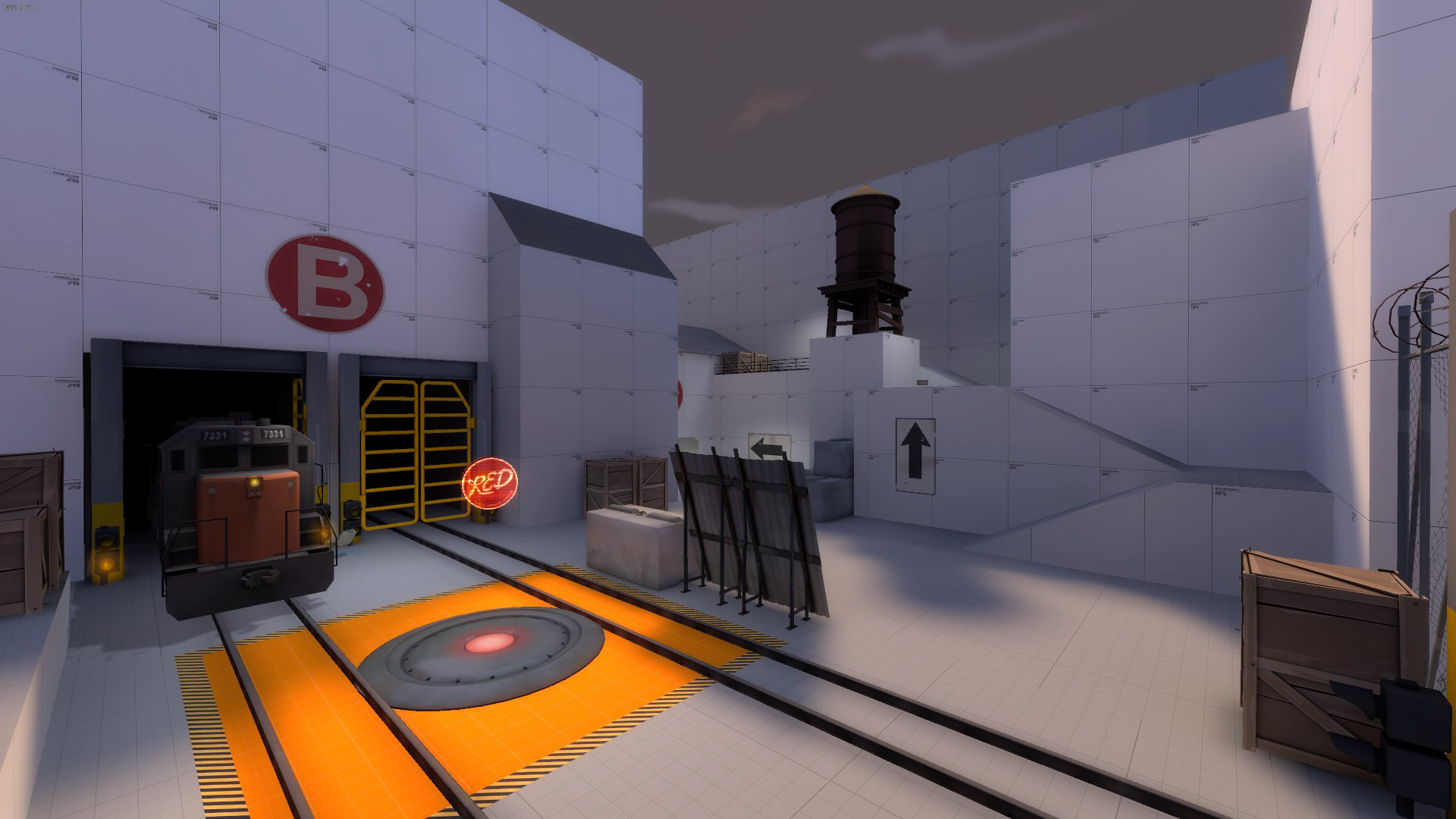 An Attack/Defense map running parallel to an active train line created for MC14. Being able to ride the trains for surprise pushes was a big hit during testing. 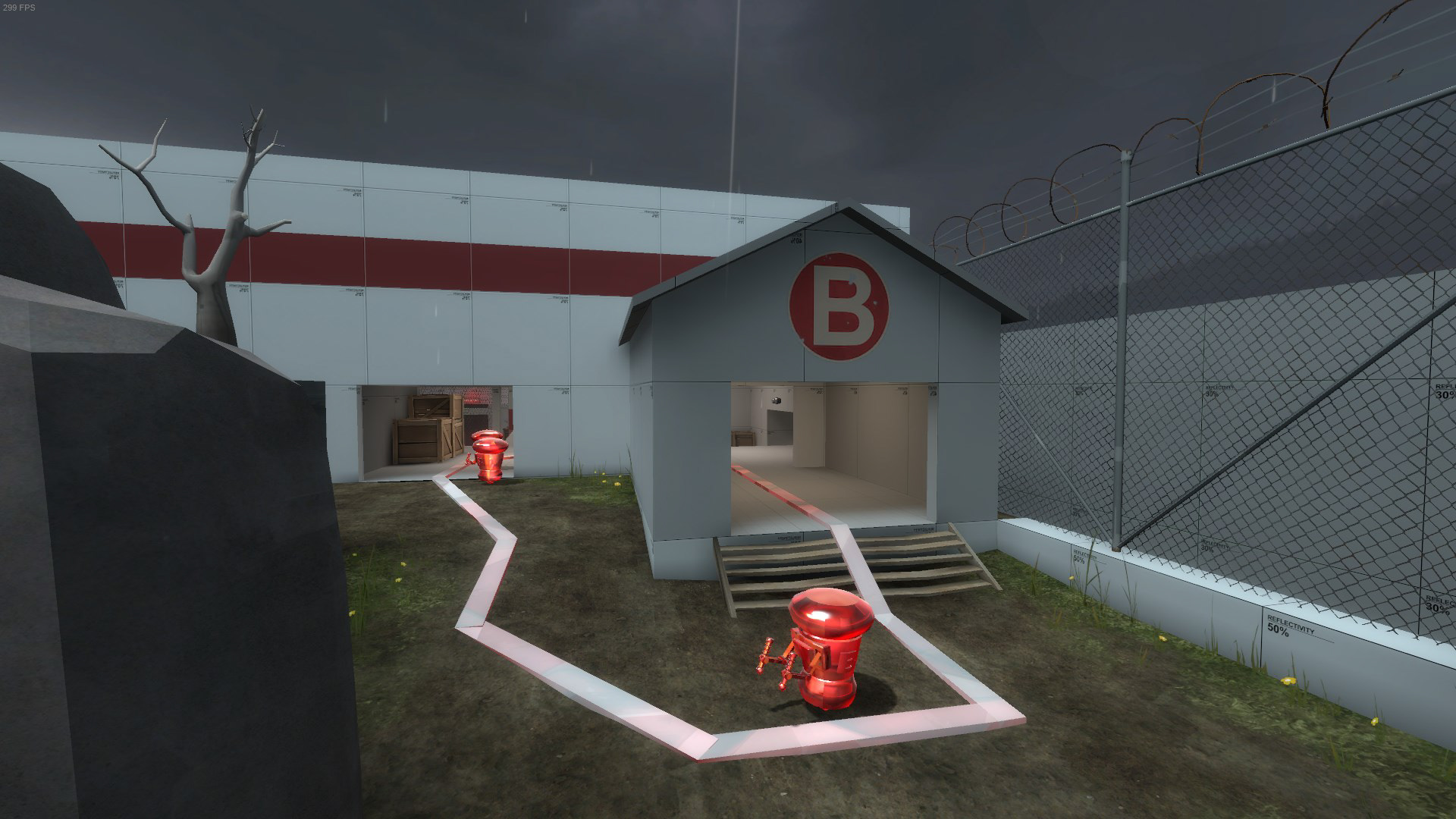 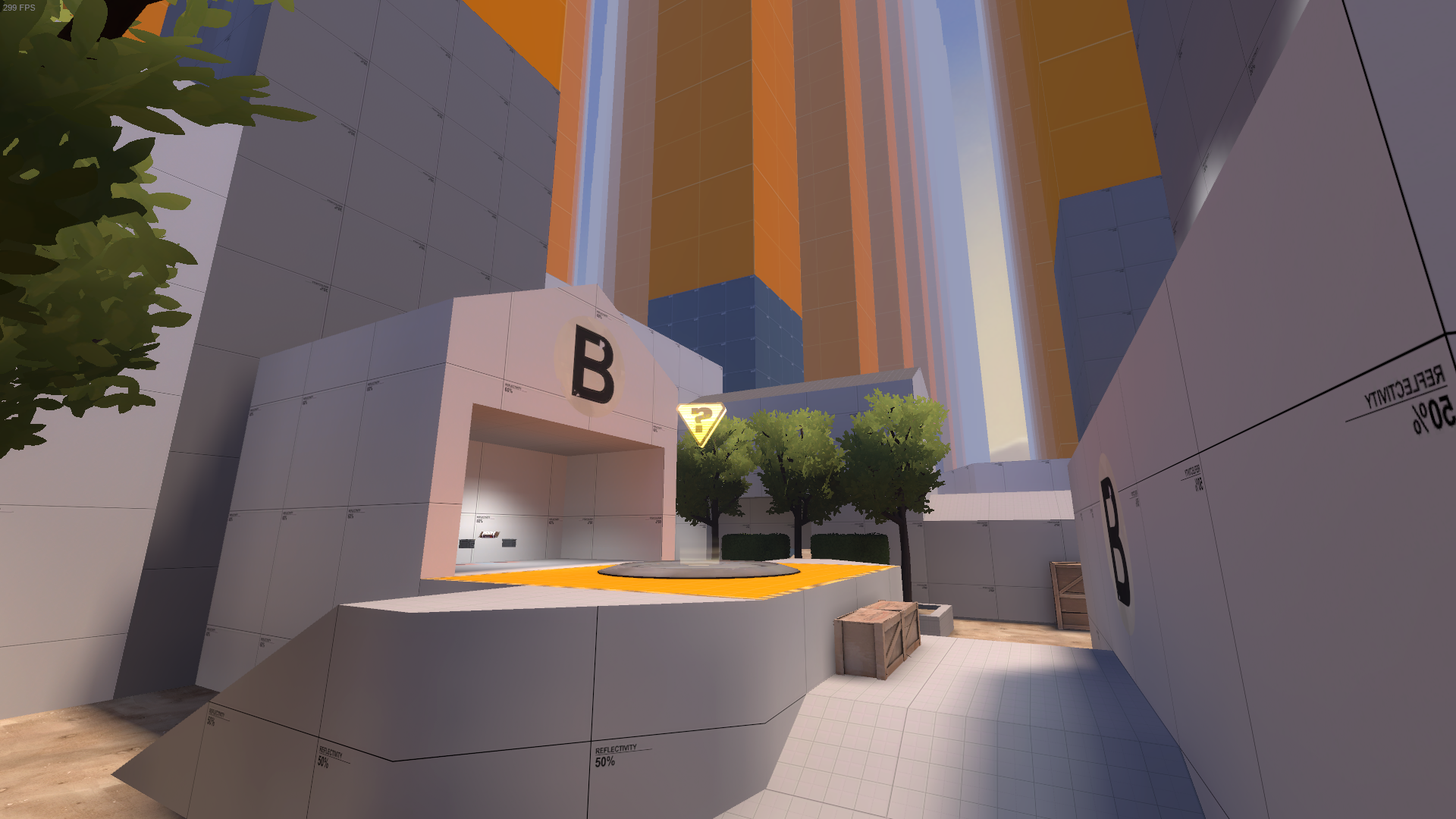 A 2CP Arena map created for MC 16, which had to weave in and around pillars that could not be built in. 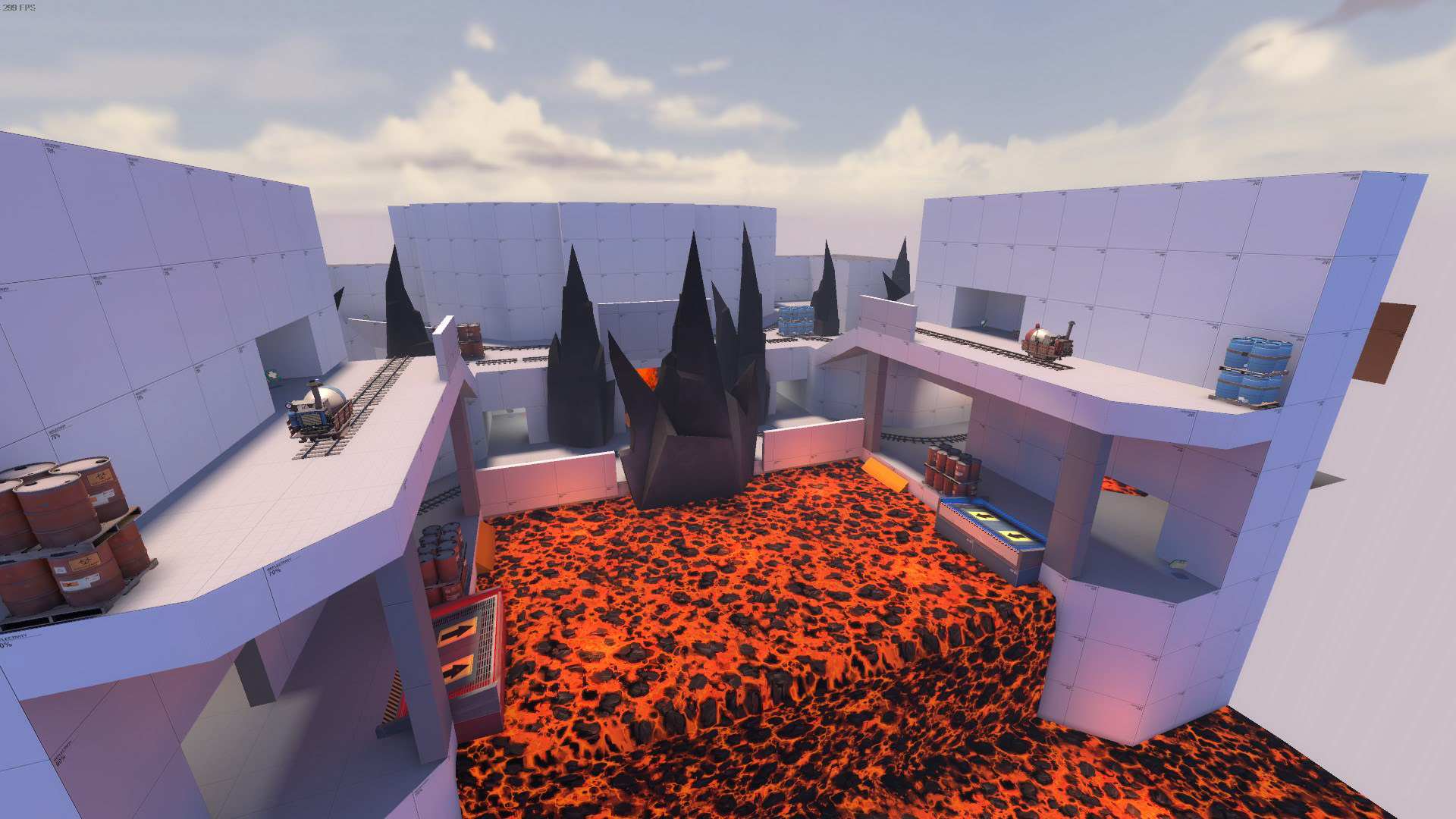 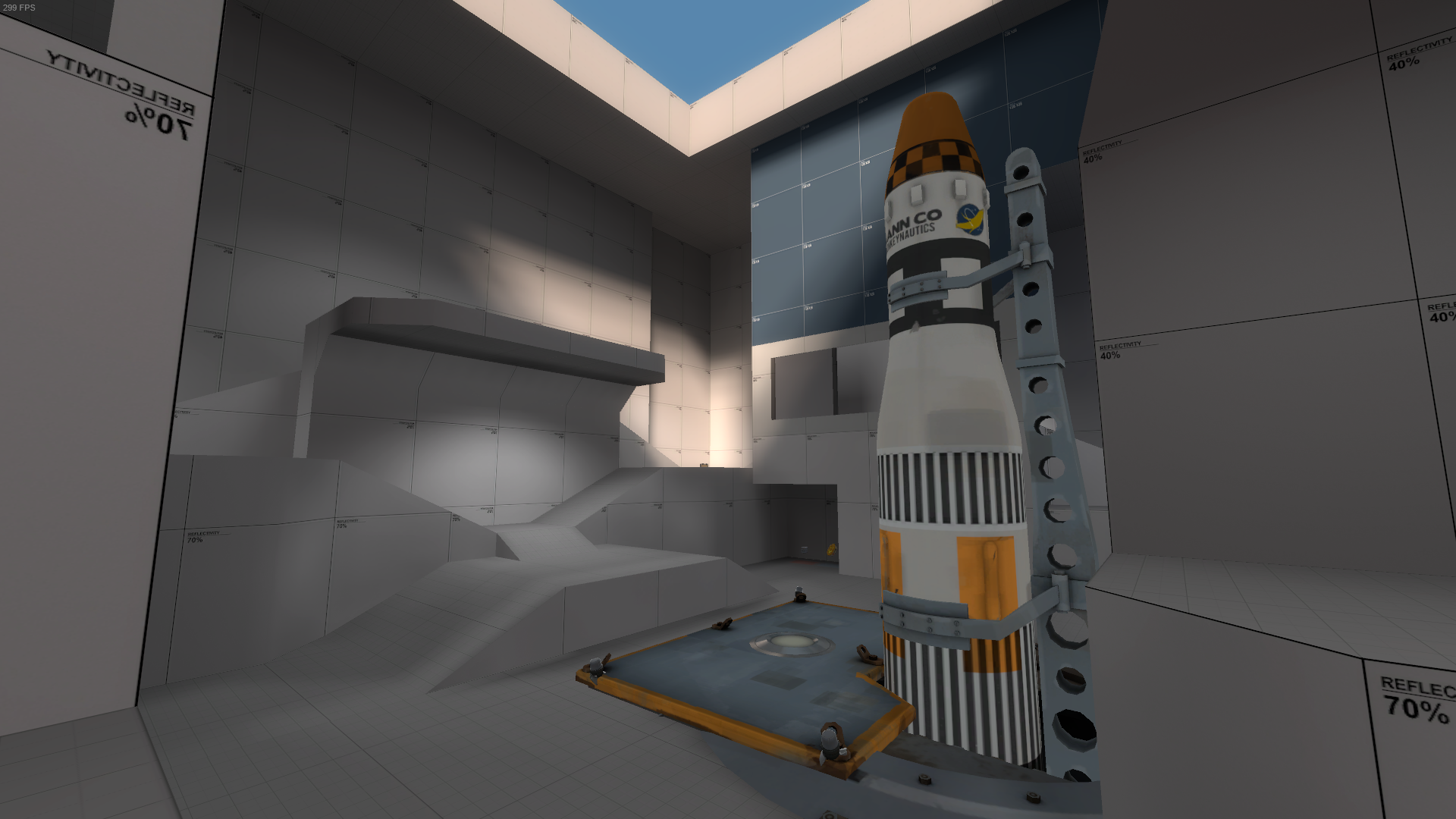 A Special Delivery map created for MC18, which challenged participants to make a level for a mode they'd never worked with before 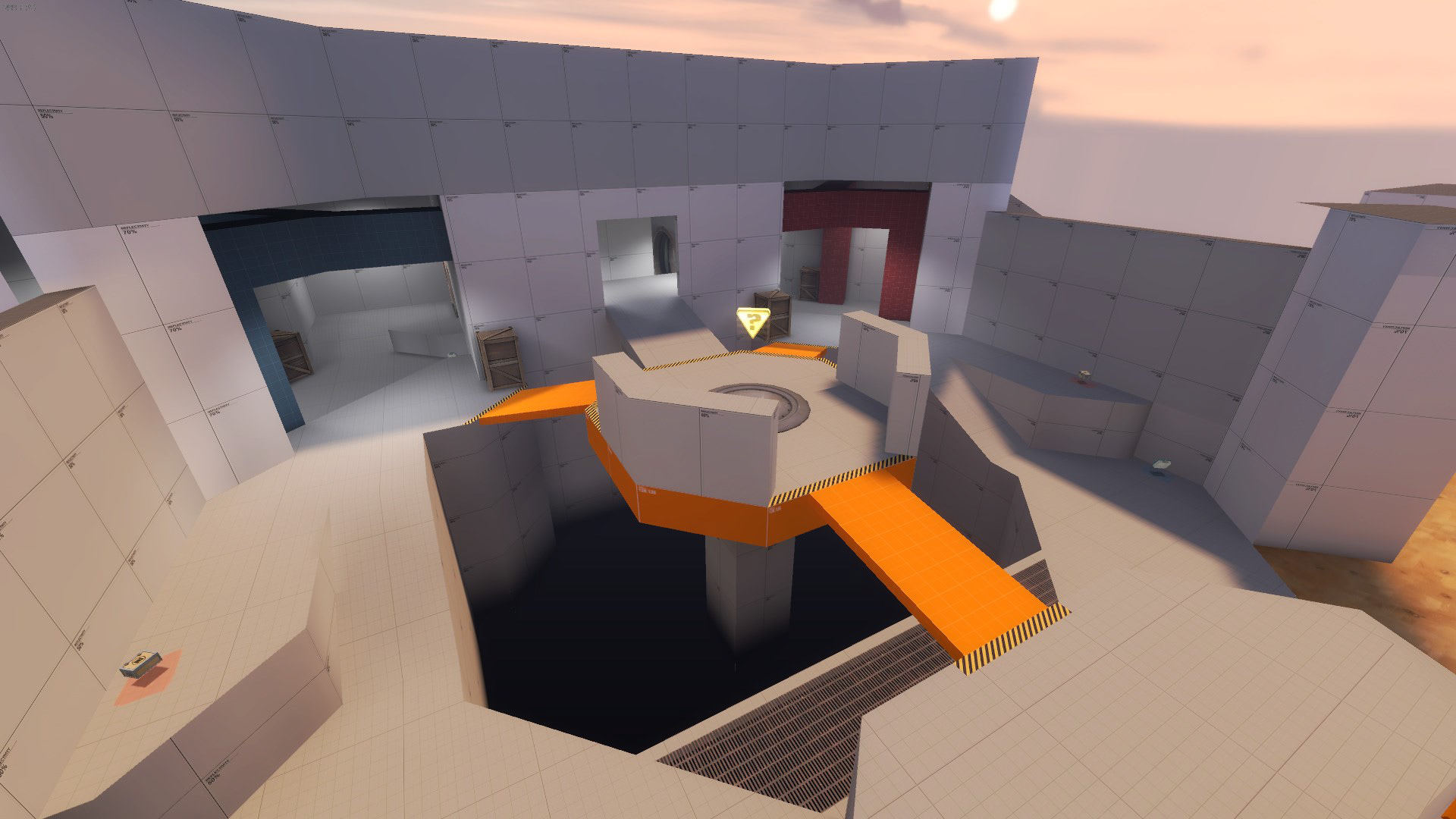 A compact and dynamic King of the Hill map created for MC19, which features bridges that randomly extend and retract, changing how teams approach both attacking and defending throughout the match 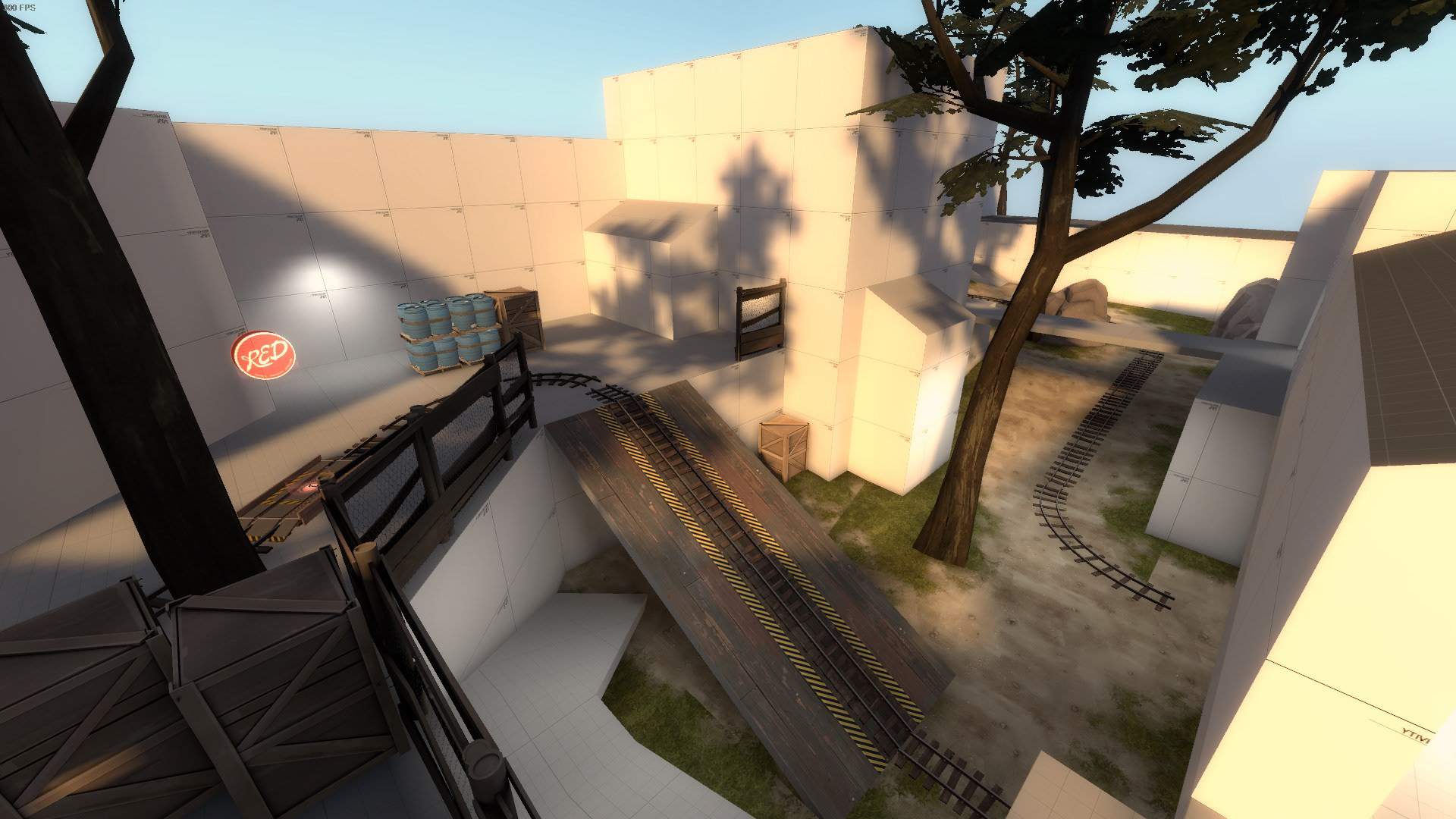 A winding payload map that wraps around itself created for MC20, which challenged participants to build a level without moving prebuilt spawn rooms that were extremely close to eachother 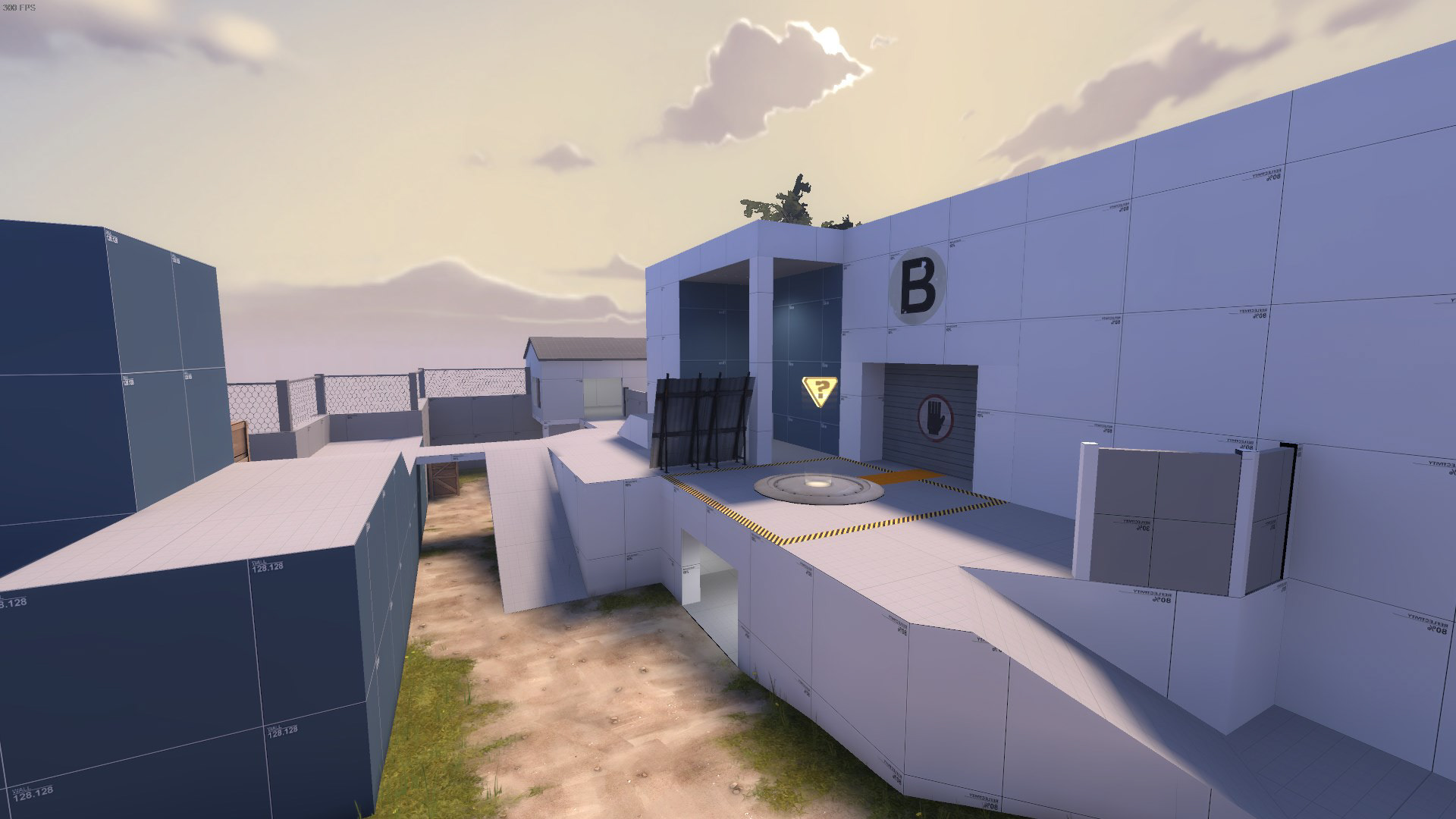 A unique 2CP Arena map bisected with a large wall created for MC21, which required two objectives placed a set distance apart. The other control point is just on the other side of the wall 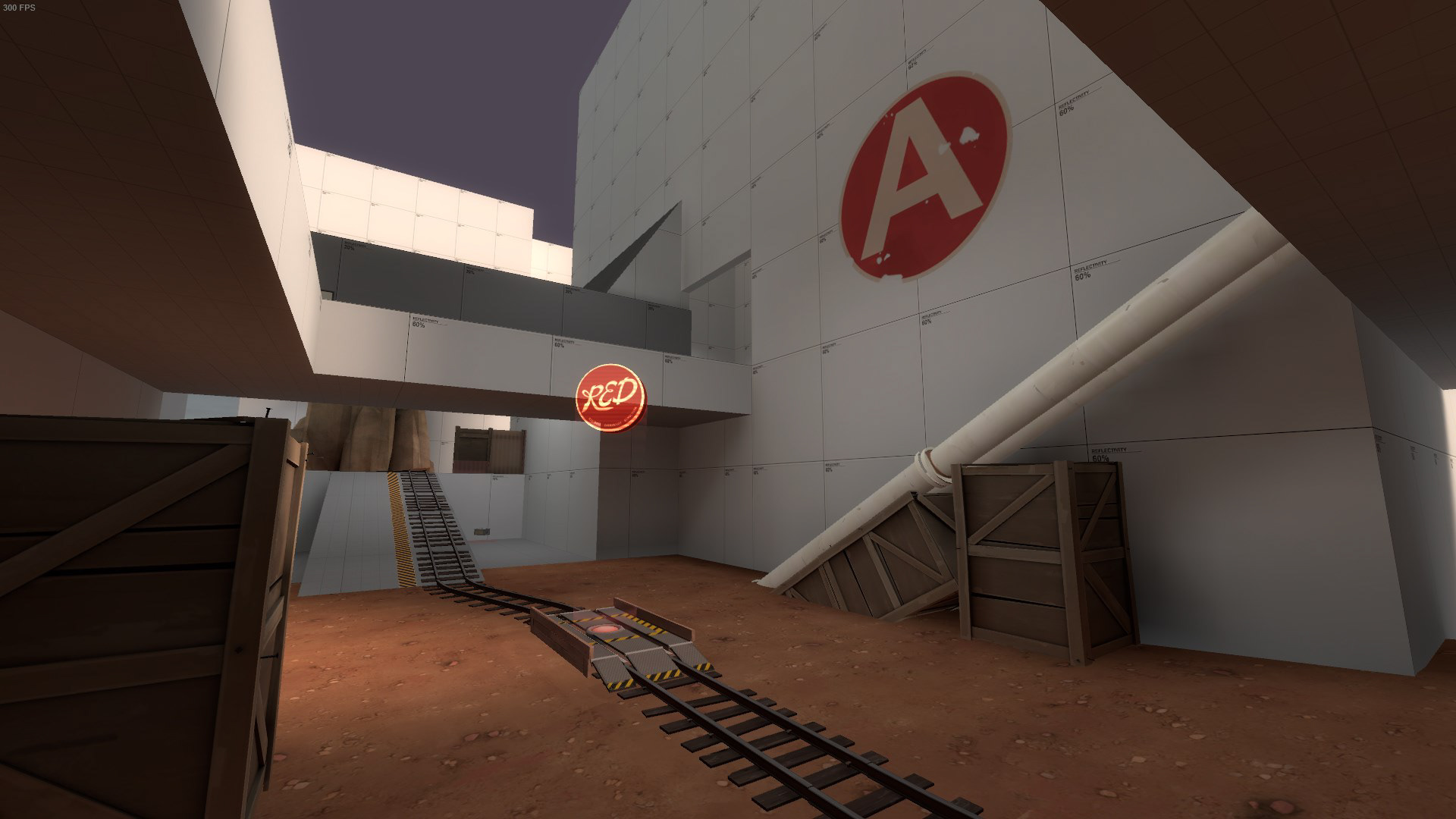 A short Payload map made with only 96 solids for MC22, which challenged participants to keep the total under 199 (or 99 if they wanted more of a challenge!)